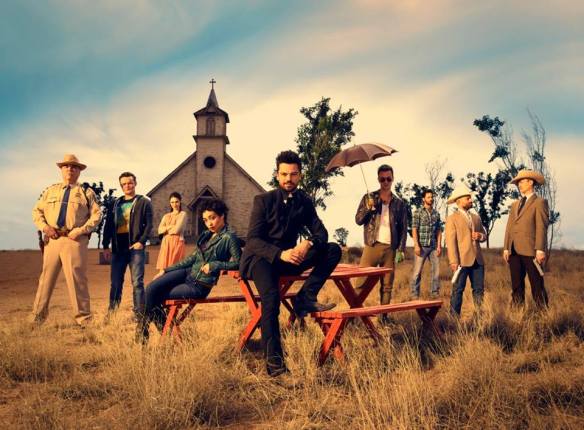 All you lapsed Catholics, it’s time to get your collective asses back to church this Sunday.

Preacher Jesse Custer and his crew have a satirical and sadistic sermon to spew when AMC premieres the first episode of the television adaptation of cult-favorite comic book Preacher this Sunday, May 22, at 10:00 p.m. ET/PT.

While only a mere two days away from blessing televisions across the world with its presence,  if you’re anything like me, 48 hours is too damn long not to get a quick taste of what’s in store.

Praise the Lord then that AMC has decided to share with everyone the opening four minutes of the series’ first episode.

Check the Preacher sneak-peak after the break.

Though a brief four minutes cannot provide a clear indication that Seth Rogen and Evan Goldberg (directors of This is the End and The Interview) have truly captured the tone of the comic, what is shown in this brief teaser should make most fans of the original material breathe easy.

It’s been a long wait for fans of the beloved and equally reviled comic series, which was published by DC comics imprint Vertigo between 1995 to 2000, to receive a filmic adaptation.

Though wildly popular during and after its initial publication, the tremendously taboo subject matters which the mature comic dealt with made many in Hollywood turn down a potential profit maker. As prone to protesting as Christian right groups in the United States are, can you really blame them? This is again a comic which dealt with an alcoholic, chain-smoking criminal-cum-preacher named Jesse Custer (played by Dominic Cooper) who discovers his body has become host to a powerful and spiritual force which has fled Heaven.

Not enough reason to cause an uproar? Well, the cast of characters which populated the Preacher comic included a charming yet violent, drug-addict Irish vampire named Cassidy (played by Joe Gilgun on the show), a mentally challenged descendant of Jesus Christ, a teenager who survived a self-inflicted gunshot blast to his face, and even God himself – who was depicted as an utter asshole.

It remains to be seen if the television adaptation will go as extreme as the original source material. However, maybe that is not the point.

Comic books are a very different entertainment medium as television and it would be crazy to expect every shocking moment that occurred within the pages of the comic to appear in this new series.

That Rogen and Goldberg have been able to adapt Preacher into a show that has shocked many reviewers who have seen Breaking Bad, The Sopranos, and True Blood, well, that’s a success.

My hope is that the Preacher television series will be similar to the comic in that, if you remain patient, you’ll discover there is a lot more than just blasphemous gore to its story.

Co-created by writer Garth Ennis and artist Steve Dillon, Preacher was one of the finest crafted American stories in the last 20 years.

Let’s pray AMC can do that story justice.

I’ll see you at church on Sunday.

4 thoughts on “Reach out and touch faith: The first four minutes of AMC’s adaptation of cult comic ‘Preacher’ have arrived”