The film has caused a bit of controversy in Miyazaki’s native land as it is a fictionalized WWII-era biography of Jiro Horikoshi (voiced by Joseph Gordon-Levitt), the aeronautical engineer who designed the Mitsubishi A6M Zero fighter plane – an aircraft that would be used by the Japanese Imperial Navy to attack Pearl Harbor.

The Wind Rises, which harkens back to the sweeping Hollywood epics of yore, tells the tale of the starry-eyed Horikoshi, whose dreams of one day building elegant and beautiful airplanes come true – a reality that will inflict heartache upon not only himself but the world at large.

END_OF_DOCUMENT_TOKEN_TO_BE_REPLACED

Legendary animation director Hayao Miyazaki (Spirited Away and Princess Mononoke) is getting ready to release his first film in five years and we’ve got three images from the film to prove it!

Based on a manga by the same name, Kaze Tachinu tells a fictionalized biography of Jirō Horikoshi, the real life designer of the World War II aircraft fighter jet the Mitsubishi A6M Zero.

The other two images of Kaze Tachinu are below: 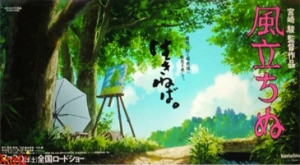 Kaze Tachinu, which will be titled The Wind Rises in English speaking countries, will open in Japan on July 20, 2013 and a trailer is expected soon.